A few months ago, this ad appeared on craigslist asking for information on the Virginia Beach Hotel Channel. 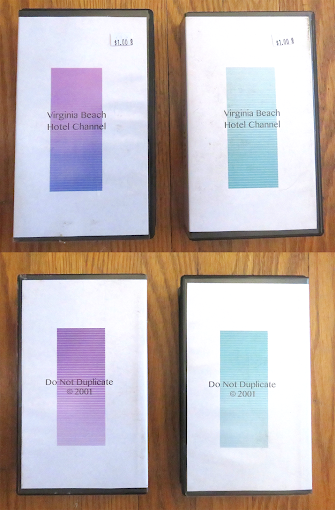 Sea Creature Media contacted the person who found the tapes and asked them a few questions about their search for more information.


How did you find the tapes?

I'm always looking for old Virginia Beach souvenirs, t-shirts, and books in local thrift stores. I don't normally search the VHS tape and movie section because I usually never find anything there - plus, I didn't even own a VCR! Sometime in September 2016, I found the first 2 Virginia Beach Hotel Channel tapes at the CHKD Thrift Store at Hilltop. An employee knew that I collected Virginia Beach stuff and told me that they'd just put out these 2 videotapes. I put one in a VCR/TV combo unit they had for sale, watched a few seconds, and was immediately hooked.

I knew that this was an interesting relic for local beach history fans and wanted to learn more about the channel. 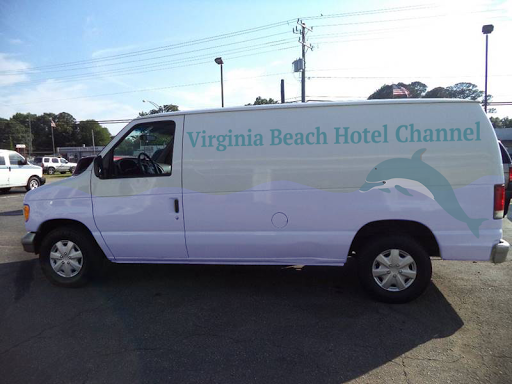 What exactly was the Virginia Beach Hotel Channel?

It was a channel that was only available in hotel and motel rooms at the Virginia Beach oceanfront area. It had original programming, local commercials, and offered basic tide & weather information for viewers. We think it started sometime in the late 90s and ended around 2010.

Have you talked with anyone that worked for the channel?

No. The first thing I did after finding the tapes was to purchase a VCR and the proper equipment to digitize them and post some of the content online. There was a lot to choose from, but I had to start somewhere. I hoped that if people saw it, they might remember it from working in a hotel that offered the channel.

I began posting on craigslist and started a facebook page to spread the word and really thought that I would receive a lot of information very quickly, but I was wrong. It seems that everyone associated with the channel has vanished.

What kind of shows were on the tapes?

There are shows devoted to local history, beach music, stand-up comedy, local restaurants, hotel room and beach safety, a muralist, fireworks, parades, fishing, and more. I currently have 3 videotapes after someone discovered another one at a thrift store this summer. They spotted it and sent me pictures of it on facebook! It contained some episodes of "The Muralist", beach music videos, an in-depth look at the history of The Norwegian Lady statue, various beach safety tips, an interview with songwriter Lewis McGehee, as well as tide & weather information. 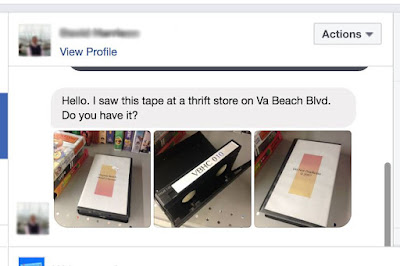 What is "The Muralist"?

It's a show about a mural painter at the Oceanfront. He discusses local mural history and his process for painting murals, but sometimes it isn't about murals at all. He's painting the windows of the old Jewish Mother in one segment and talks about how he's had everything on the menu over 20 times. He stops painting and just talks about his favorite sandwiches for the rest of the show. We never find out who he is or what he's doing now.

* UPDATE August, 2020 - he is still painting murals, but lost vision in one eye. 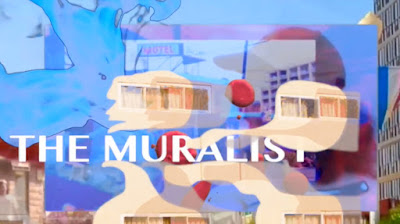 What's currently going on with your search? Any updates?

I work full-time and have a family, so I can't devote all the time I'd like to this project. Plus, we're in the process of moving to Chesapeake.

A local Virginia Beach historian and author has offered to help by putting up posters at various Oceanfront businesses. She's lived at the North End since 1978 and doesn't remember the channel at all. She thinks that nobody is coming forward to claim involvement with the channel because there could be some outstanding debts or advertising money that wasn't refunded when the channel ended. I don't know. That makes me even more curious!

A few facebook messages have mentioned that the channel was available in some houses near the resort area. Not sure how that was possible. If it was broadcast on a public access channel, how did the videotapes end up at a thrift store?

Not everything on the videos is interesting, but I think it's interesting enough for people that enjoy local Virginia Beach history. I'd like to combine all the best clips and have a public showing one day. Maybe invite some people who had a hand in creating it - if we can find them!

I tell folks to keep their eyes open for videotapes labeled "Virginia Beach Hotel Channel" or "VBHC" at thrift stores or yard sales. There's got to be some sort of printed information about the channel out there somewhere, too. Advertising rates, contracts, schedules, etc.

If you see a videotape - please purchase it! Test it in a VCR at the thrift store if possible. I will reimburse you for it, just keep your receipt. Send a message and a picture of the tape to the facebook page.